Biological changes in the gut microbiome as we age may be connected to overall healthy aging and increased survival rates, according to NIA-supported research published in Nature Metabolism. Learning more about the balance of this microbiome — all the microorganisms, bacteria, viruses, protozoa, and fungi, and their collective genetic material in the gastrointestinal (GI) tract — is an evolving scientific field. Current findings suggest potential connections to many health conditions including obesity, metabolic disorders, inflammation, cancer, and depression. 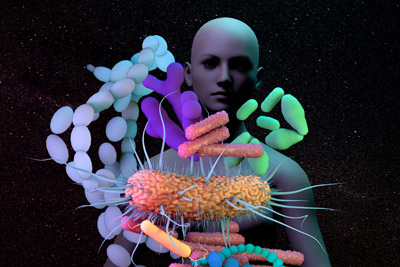 Throughout the human life span, gut microbiome follows some predictable patterns, with rapid change from infancy to age three, stability up until middle age, and then accelerated change starting in late adulthood. Similar to fingerprints, no two microbiomes are exactly alike but there is a common group of microbe types found in everyone, comprising about 30 percent of the total.

For this newer study, the research team analyzed gut microbiome genetic sequences and a wealth of other health and survival outcomes data from more than 9,000 people between the ages of 18 and 101. They paid particular attention to a longitudinal study of a community of over 900 older adults to get a clearer picture of the makeup of the mature GI microbiome.

The investigators found that older adults who had a more unique pattern of changes to their GI microbe profile also tended to be healthier and live longer than peers with less microbiome divergence. The healthier participants’ blood tests showed lower levels of LDL cholesterol and higher levels of vitamin D, but also more beneficial blood metabolites produced by gut microbes. One of these metabolites, tryptophan-derived-indole, has been shown to reduce inflammation and to extend lifespan in mouse studies.

People whose gut microbiomes had grown more unique with age were able to walk faster and had better overall mobility than peers who showed less GI microbe changes with age. Plus, those with less diverse gut environments used more medications and were nearly twice as likely to die during the study period.

The research team suspects that modern diets rich in salty, sugary, or fatty processed foods may damage the aging gut, while higher fiber nutritious foods like fruits, vegetables, seeds, beans, and nuts could be combined with exercise to help protect a healthy gut microbiome balance as we age. More studies will enable continued explorations into the links between our body’s gut microbes and overall healthy aging, especially the role of diet and physical activity.